Experience for yourself and find out why Shaka Zipline is Kauai’s top rated zipline company.

Uncover Kauai’s rich history while our guides keep you safe and smiling through the tour. Our guides are experts at what they do and truly set Shaka Zipline apart from the rest!

Safety is our #1 priority! Shaka Zipline follows ACCT industry regulations and is audited quarterly to ensure all standards are met or exceeded. 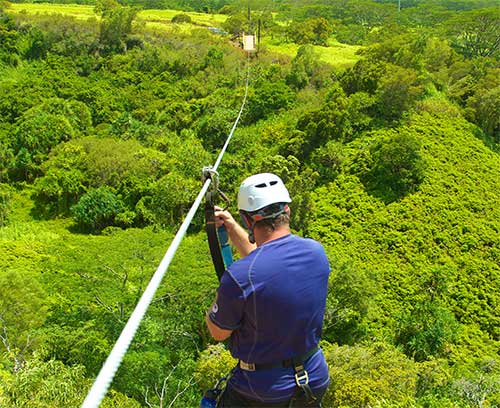 Leap off platforms over the top of 200-foot drops and fly over acres of lush, untouched Hawaiian landscape with outstanding mountain and ocean views. 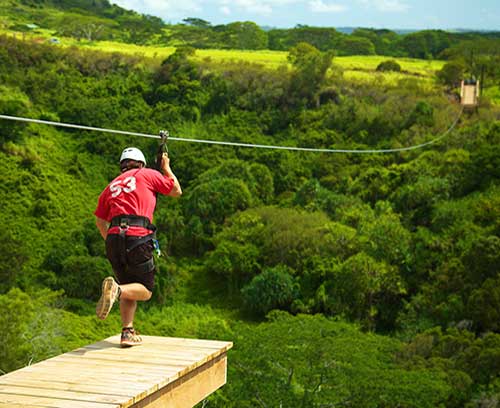 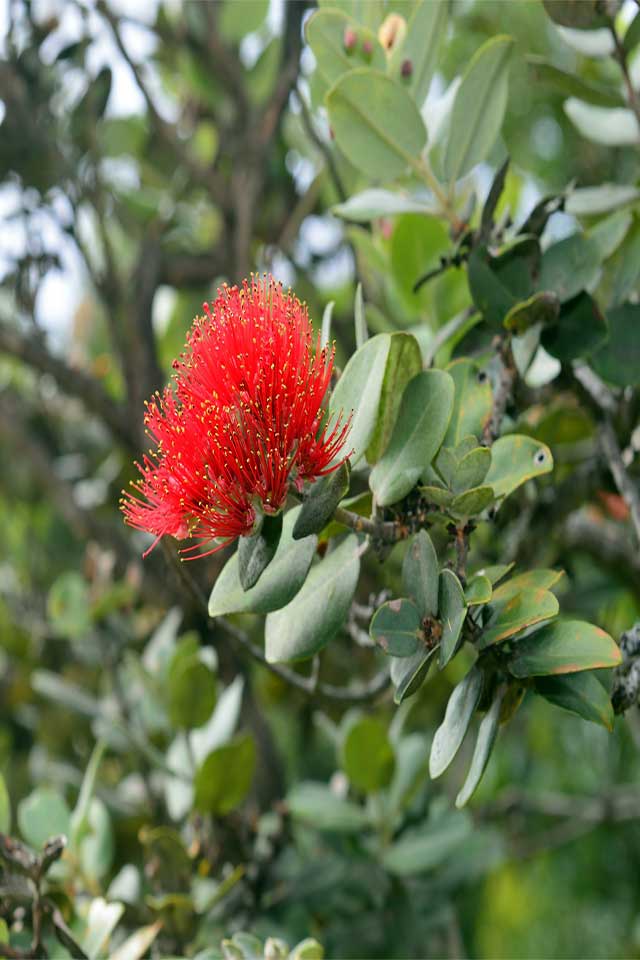 Kauai is steeped in legends and folklore handed down from generation to generation through spoken stories. One such legend is the romantic story of Ohia and Lehua. Today, the Ohia Lehua (Metrosideros Polymorpha) is facing a real-life tragedy as described below. At Shaka Zipline our mission is to connect a safe, exciting adventure that informs and educates our guests on Kauai’s history and culture through minimal environmental impact and contribute to the preservation of Kauai’s fragile resources.

The Legend of Ohia

There was once a man named Ohia. He was strong and tall and it was said that the Pele, the goddess of volanoes, had a crush on him. Sadly for Pele, his heart belonged to another woman named Lehua. And Lehua returned his love. One day, Pele was walking in a forest and came across Ohia. She tried to catch his attention, but he was oblivious to her efforts. Ohia could only see Lehua as he was walking and happiness struck his face. Pele grew so angry that she could not have Ohia. She struck him and turned him into a twisted ugly tree in revenge of rejecting her. Lehua looked at her love in tears, begging Pele to return him to her or to turn her into a tree as she couldn’t bear to be separated from him. Pele refused to grant Lehua her wishes, but the other Hawaiian gods were angry with what they saw. They decided to reach down to Lehua and turn her into a beautiful red flower. They placed it upon the twisted ohia tree so she could remain one with Ohia.

Legend has it that whenever a flower is plucked from the tree, heavy rain falls upon the land like tears. Lehua still cannot bear to be separated from her beloved Ohia.

Ohia trees are endemic to Hawaii. They are found in almost all Hawaiian ecosystems, both wet and dry, ranging from lowland dry shrublands and rainforests to dry lava flows and high elevation bogs. Ohia was used by early Hawaiians to create weapons, everyday tools, and medicinal teas. Leaves of this tree sustained populations of native birds, such as the apapane and the mamo, whose vibrant feathers were used in traditional Hawaiian clothing and ceremonial adornments. Today, Ohia blossoms continue to be used in cultural ceremonies and practices, such as lei and hula, though many hula practitioners have begun forgoing the use of Ohia to prevent the spread of Rapid Ohia Death (ROD) and protect this culturally significant tree species. Adapted to the variable and sometimes harsh weather conditions of the Hawaiian islands, Ohia play a key role in watershed protection and water conservation by retaining water following storm events and preventing subsequent erosion and flooding.

Unfortunately, in 2014 Rapid Ohia Death (ROD) was discovered. It is a fungus (Ceratocystis fimbriate) that attacks and quickly kills Ohia trees. On Hawaii thousands of Ohia trees have already been killed by ROD. As researchers believe this fungus can spread over long distances, ROD has the potential to kill Ohia trees across the entire state. 2018 saw the first case of ROD on the Garden Isle of Kauai.

How can we stop the spread?

By properly cleaning shoes before entering the course, and upon exiting, we can make sure we aren’t spreading infected seeds, leaves or debris. Shoe cleaning stations include dry scrubbing as well as a rubbing alcohol spray on the soles of your shoes. Sadly, ROD has spread to locations on Kaua’i. Please be sure to use shoe cleaning stations on our course, and any other locations on the Garden Isle where provided. YOU can stop the spread.

WHERE DO WE CHECK IN?

Check-in for Shaka Zipline Poipu is at our retail store at the Shops at Kukui'ula. We are located on the Mauka (mountain) side of the shopping center. Driving directions are included in your confirmation email. Our address is:

WHAT HAPPENS IF IT RAINS?

Tours operate rain or shine. If we do cancel, we'll make every effort to contact you in advance to reschedule or refund the tour.

Our Hassle-Free Cancellation Policy guarantees that you receive a 100% refund for any tour cancelled at least 24 hours in advance of your tour time. For cancellations made within 24 hours of your tour, we can only provide a refund if we are able to rebook the spots on your tour.

WHAT SHOULD I WEAR?

Shorts or pants and a t-shirt are ideal for your comfort.

WHAT KIND OF SHOES DO YOU RECOMMEND?

For your safety, we ask that you wear shoes with a fully-enclosed toe and heel, like an athletic or hiking shoe. Shoes must be snug. (No water shoes. No Teva or Keen-type sandals with open sections or 5-finger shoes.)

WHAT IF I WEAR GLASSES?

Glasses and sunglasses may be worn - just be sure to bring your strap.

CAN I BRING A BACKPACK OR PURSE?

We don't have a spot to lock up anyone's items. We do provide a zippered bag that can attach to their harness or waist to store small items.

CAN I USE MY CAMERA / GOPRO / CELLPHONE?

Bring your camera on the zipline portion of the adventure at your own risk. We recommend that you securely strap it to yourself or use one of our free pouches to store it while you zip. There are GoPro cameras available to rent on each tour.

ARE THERE ANY MEDICAL CONDITIONS THAT WOULD PREVENT ME FROM ZIPLINING?

ARE THERE ANY WEIGHT RESTRICTIONS?

Yes. Children 10-17 will need a waiver signed by their parents. A parent or guardian must accompany a minor on the tour as a paying participant.

*Participants that appear or display behavior consistent with being under the influence of drugs or alcohol may be refused service.